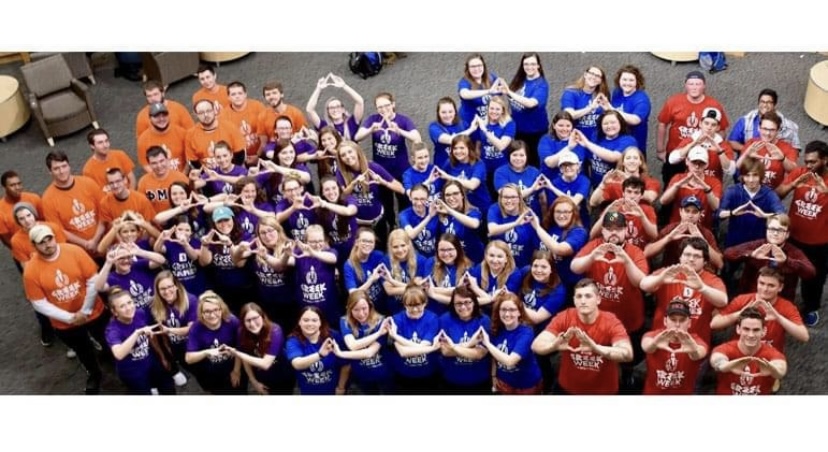 Have you ever considered being a part of Greek Life? Shawnee State University (SSU) has a bustling Greek life presence on campus with two fraternities: Tau Kappa Epsilon (TKE) and Phi Mu Delta (PMD), and two sororities: Delta Phi Epsilon (DPhiE) and Theta Phi Alpha (TPA). Greek life can be a great way to get involved on campus. Joining a fraternity or sorority can help students make connections with people who share the same values and have similar goals which can lead to a more fulfilling college experience.

Fraternities and sororities are known for their philanthropic work. Each fraternity and sorority has their own philanthropy/philanthropies that they volunteer their efforts and time; these efforts can range from bake sale fundraisers to donate to the organization they support to hosting large scale events to raise money for a specific cause. TKE’s and PDM’s national philanthropic partner is St. Jude Research Hospital. TPA’s philanthropies include Camp Friendship, The House that Theta Phi Alpha Built, and Glenmary Home Missioners. DPhiE has three philanthropies as well: the Cystic Fibrosis Foundation, ANAD (Anorexia Nervosa and Associated Disorders), and the Delta Phi Epsilon Education Foundation.

Each Fraternity and Sorority has something unique to offer and the Greek organizations at SSU recognize the importance of unity. Rather than competing with each other like many other universities do, TKE, PMD, DPhiE, and TPA all focus on supporting each other and celebrating their differences.

The first of the two fraternities, Tau Kappa Epsilon, is a nationally recognized fraternity, founded in 1899. TKE includes over 270 chapters and colonies with more than 260,000 men having been initiated into the brotherhood of Tau Kappa Epsilon. The SSU chapter of TKE currently has 9 active members, a lower number than they are used to seeing due to having to postpone Rush because of COVID-19. In an interview with Ryan Rainey, a five-year member of TKE, Rainey said he initially got involved with Greek life because it would look good on a resume, but his mindset changed once he realized how much he had in common with the other brothers.

The Phi MU Delta Fraternity was established in 1918 as the first national fraternity to accept men regardless of their race or religious affiliation. The Mu Rho Chapter of Phi Mud Delta at SSU was chartered in 2016. They also currently have 9 active members. Isaac Newsome, a member of PMD, when asked why he thinks people should get involved with Greek Life, he replied saying “I personally think Greek Life is a great way to get involved on campus and to meet new people.” Newsome said he met most of his friends through his fraternity.

The Theta Phi Alpha sorority, installed in 2003, is the oldest sorority on campus. TPA currently has 26 active members, not including the new members that joined during Fall 2020 Recruitment. Megan Saxby, a member of TPA, was asked what she has gained from being in a sorority. Saxby replied saying, “I have learned so much from other sisters whether it is about life or within the sorority” continuing on, she said, “I have also gained leadership opportunities that will help me in my future career.” TPA has a commitment to social service and they strive for educational excellence and professional achievement.

The other sorority on campus, Delta Phi Epsilon, was founded in 1917 and chartered at SSU in 2012, and since then they have been welcoming new women into the sisterhood each year. DPhiE currently has 17 active members and they just welcomed 10 new members during Fall 2020 Recruitment. During a brief interview with Kelli Hoffman, the Vice President of Recruitment for DPhiE, she was asked why she believes people should join Greek life. Hoffman said she thinks people should join Greek Life because they will make “lifelong friends and memories that will last forever.”

Greek life on campus is looking a little bit different this year due to the current COVID-19 pandemic, but the Fraternities and Sororities at SSU are still steadfast in maintaining their values and continuing to work to make the world a better place. Recruitment for each organization is held every semester, so keep an eye out for information about Spring 2021 Recruitment.